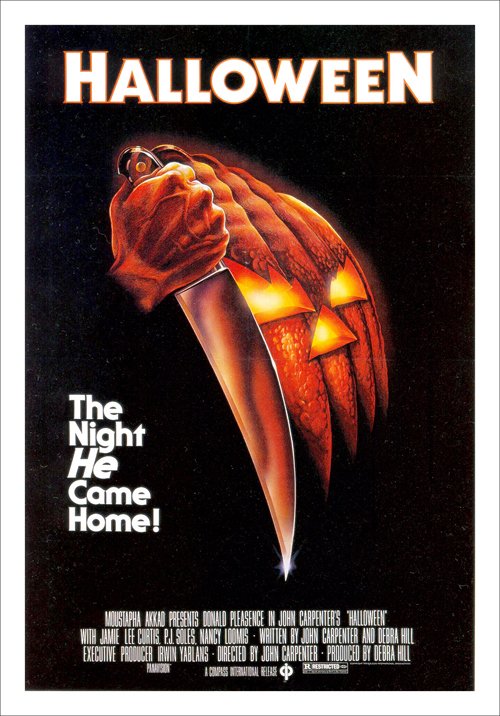 For centuries, Halloween and fear have gone hand-in-hand. It’s an obvious correlation when one of the traditions of a holiday is to have people dress up as demons so that the real demons don’t get you.

However, it took until 1978 for a movie to place a monster in this horror holiday. Maybe it just seemed too obvious. Maybe Halloween was still meant to be good fun. Maybe the idea of candy tampering was scary enough.

Whatever the reasoning may have been to not have a slasher movie based around Halloween, John Carpenter and Debra Hill dismissed them in order to create the independent horror classic Halloween, which went on to become a franchise of fear.

Plot: In 1963, 6 year old Michael Myers murdered his older sister on Halloween night with a butcher knife at his home in Haddonfield, Illinois. Fifteen years later, he escapes from the mental institution that he has been a silent occupant of to return home with his doctor, Sam Loomis (played by Donald Pleasence) hot on his trail. Upon arriving, he notices Laurie Strode (played by Jamie Lee Curtis) and seems to become obsessed with her, constantly lurking in her vicinity as a faceless shape.

On Halloween night, Michael Myers attacks, leaving a pile of bodies in his wake.

Killer: Michael Myers, aka The Shape, aka The Bogeyman, aka the silent serial killer in a featureless Halloween mask that seems to have no motive except to kill for the sake of killing.

Critique: To call Halloween a mere slasher movie does no justice for this film. It is not your normal “hack-up” horror movie filled with blood and boobs. Well, there are some boobs, but nowhere near the amount of blood that is usually prevalent in horror movies at the time. Even each the other sequels of the Halloween franchise tout more blood than a thousand viewings of the original film. you know what? Good.

Instead of bloody special effects, John Carpenter lifted the standards of film noir from movies like The Cabinet of Dr. Caligari to Hitchcock’s Psycho and fit them into a contemporary horror movie. It worked. The use of lighting to play with shadow effects made the use of blood an afterthought because, really, how were you going to see anything red if everything was dark with faint blue hues of artificial light? This is how film noir kept its movies more suspenseful, which can cause just as much fear as a severed head rolling across the floor.

The concept of “The Shape” aka Michael Myers, was so foreboding because it really was the embodiment of the unknown. Scenes where Michael Myers is just a silhouette in the distance, a faceless stalker, are just as menacing as the scenes where he wears a featureless mask. As scenes get closer to the killer, such as when Bob is killed, we see than even Michael Myers conscience is truly featureless by how he looks at Bob’s motionless body impaled with a butcher knife, and slowly cocks his head sideways, studying his work. It’s at this point that we truly understand that Dr. Loomis isn’t a mad doctor.

Then, there is John Carpenter’s score. No other horror movie has come close to a musical composition that just drips with dread. The breathing of Jason Voorhees comes close, but that’s not music. That’s just a sound effect.

Scene of Awesomeness: Young Michael Myers stands in his clown outfit with a bloody butcher knife as his parents arrive home. This is one of the most haunting visuals in the history of slasher movies.

Scene of Ridiculousness: Michael Myers strangles Laurie when she begins to call Lori. Laurie thinks Annie is calling her during sex as a joke. Whoopsie.

1 butcher knife to the stomach

2 pairs of breasts (and 1 minor side-boob)

Actors/Actresses of Note: Jamie Lee Curtis launched her film career with Halloween. What is even more amazing is that, in interviews, she still has pride in the fact that she was a part of this legendary franchise.

Quote: “I watched him for fifteen years, sitting in a room, staring at a wall, not seeing the wall, looking past the wall – looking at this night, inhumanly patient, waiting for some secret, silent alarm to trigger him off. Death has come to your little town, Sheriff.” -Dr. Loomis