Serena Joy, what have you wrought?  We have been too long, too close to Offred to truly consider the extent of the other woman in the Commander’s life.  And yet, for all his sweaty knuckled awkward boner-ed condescension, the Commander is only half the threat Serena Joy is.  Because we learned last night that frigid and proud, Serena is Lady MacBeth – and in many ways, the architect of the new world.  Here’s what happened:

The Commander, who I will be referring to as Fred from here on out, because I’m mad at him and the name “Fred” sounds much more buffoonish than “The Commander”, and Serena Joy throw a schwanky party to meet with the Mexican ambassador (confirming our previously housed suspicions that Fred is someone important within the hierarchy of Gilead.)  Offred is brought into the party at a designated time and is surprised to see the ambassador is a woman; one who has misgivings about the current state of Gilead’s society.  Under the heavy stares of the governmental muckety-mucks, Offred presents as a perfectly behaved domestic, never revealing the horror of her situation to the ambassador.  After the meeting, Fred summons Offred to his office for another bout of forbidden Scrabble and rants about the outcome of the visit and how belittled he felt.  In the classic mode of petty men made to feel small, he is petulant towards Offred, and sends her away.  Realizing that most of her power resides in her ability to manipulate him, Offred plays obsequious and apologizes.  He asks her to kiss him, and she does, a mild, chaste thing that nevertheless inspires a tooth brushing so fierce it brings blood to her mouth.  Another party is thrown, where well-preserved handmaids are in attendance.  After they are presented and lauded as guests of honor instead of the captives they are, the children of Gilead – the children of these bound women – are brought in, to show how fertile Gilead has become.  The wealthy prove how damn relatable they are by romping and playing with the fruits of their state sanctioned rape, and the Mexican ambassador is impressed.  For whatever else the rest of the world has been able to cultivate, they have not been able to bear children.  Offred goes to Nick and does the only sane possible thing – she freaks the hell out.  Nick gives her kindness and understanding and eyebrows, and I love him, so let’s just move on.  The ambassador returns to the house to bestow parting gifts to Serena Joy and Offred, and in the moment they share, Offred tells her everything about the reality of her life; the beatings, the rapes, the helplessness.  The ambassador manages at least passing shame as she establishes that she can’t do anything to help Offred, and that she will be moving forward with the plans to establish trade between Gilead and Mexico – Mexico’s whatever, for Gilead’s handmaids.  After the ambassador leaves to give Serena Joy her parting gift, her assistant stops Offred and tells her that he can get a message to Luke.  Because he’s stone cold still alive.  And in the past tense, we see that Serena Joy and Fred used to be very hot for each other, very passionate and loving.  Serena wrote books and preached about the need for women to focus on reproduction.  She orchestrated Fred’s rise, and became the perfect politician’s wife; still able to pull the strings in the background.  Alright now, call ‘em out:

Return to Traditional Values: We no longer need to guess whose values we’ve been looking at; we know they are Serena Joy’s.  Her book is called “A Woman’s Place,” and the bitter irony is that the book’s success – the collective lowering of women – results in women being unable to read her stupid book, as we learn that women lose a finger if they are caught reading.  But less overt, is the presence of the wives at Fred’s big introductory party for the ambassador.  They are entirely separate, so much so that it is jarring to see the ambassador herself on the couch, surrounded by men of power.  The wives are not active players.  They are ornaments and set dressing.

Code Speak: Not to belabor the point, but Serena Joy’s book is called “A Woman’s Place.”  The fact that a woman wrote a book with such a loaded name, one so closely associated with the subjugation of women, is a deft way of establishing Serena as an oppressor, and not as we had maybe allowed ourselves to believe previously, a secret ally.  The ambassador refers to the wives as the “quiet half of the room,” and while it may seem like a statement of sympathy, from our larger perspective as viewers, it is an indictment.  These aren’t handmaids; they are women who are remaining quiet about the abuse of other women.  They are complicit.  Before the big, revealing the children party, Serena tells the Aunt in charge of the handmaids to “remove the damaged ones” – as if anyone could remain undamaged in such a world.  But the casual use of the phrase “the damaged ones” shows how disposable and less than human the handmaids are to Serena.  She then tells the Aunt that “We have to do what is best for everyone, not what is fair.”  Which establishes that to her, the handmaids aren’t even people.  Because surely, this society isn’t what’s best for them.

Finally, I want to discuss the significance of dead names, because they are utilized in this episode more than ever before.  Offred tells hers to Nick, and it is, in many ways, a greater intimacy than the marathon boning they did at the end of the last episode.  When a distraught handmaid is told she can’t go to the big dinner because she has had her eye removed, the Aunt is able to calm her by calling her Jeanine.  The ambassador chokes on calling June “Offred,” and at the end, the agent is able to win her trust by using her deadname.  They are identity, and forbidden.  And in June’s case, it is representative of her becoming.  She is casting off Offred.

They’re good at making us distrust each other: This episode showed June being somewhat complicit in her own subjugation; she said she was happy to the ambassador, but only because she was – quite literally – under his eye.  Nevertheless, it is a perfect example of how impossible it is to trust in Gilead, because everything that is said is said with the fear that someone might be listening.

Keep your head down.  All this crazy shit is going to end. It’s not.  June has, on some level, believed that until this point.  But realizing that she and other handmaids are about to become tradable has altered that perspective.  She’s not keeping her head down anymore.

Femininity Equals Fertility: is the whole thrust of Serena Joy’s book.  An interesting position for a woman with no children to take.

A quick word; I highly recommend reading the perspectives of women of color on the show.  Black Girl Nerds did an excellent write-up, and there is plenty of scholarship going around about it.  It is a viewpoint that is important to read and learn, and one that I could not possibly speak to.  This show is an excellent reminder of why feminism absolutely must be intersectional, or nothing worth.

Because the episode itself was so dense and bleak, I want to include one quick, moderately happy thought: But Kelly, are Nick and June still super hot together?: Good news, guys.  They are.

And now, with precisely none further ados, here’s What did Jim Think of it?

“Well done, Nick!  This weeks episode I’ve titled “Love me Two Times” (almost three!) and it begins with Nick still making sweet sweet lovin to Offred and proving that he is the man.  The commander gets some important visitors from Mexico and he looks to finish his trade negotiations with them.  Offred lends a hand to the cause but when she gets a moment alone with the Mexican president, she reveals the horror of her situation.  The president is sympathetic but their country is dying and hasn’t produced a viable baby in six years so they will likely move forward with trading Handmaids for tasty Mexican chocolates and cerveza.  This glimpse of the future clearly reveals that Trump’s presidency was a failure and we never got that wall built to protect our handmaids from the Mexicans. Offred took a huge risk and was ultimately rewarded with the knowledge that her husband is still alive and she has a chance to get a letter off to him.  Nick will be none too happy about this development.”

I’ve run long and writing about this has made me sad.  So here are my notes: 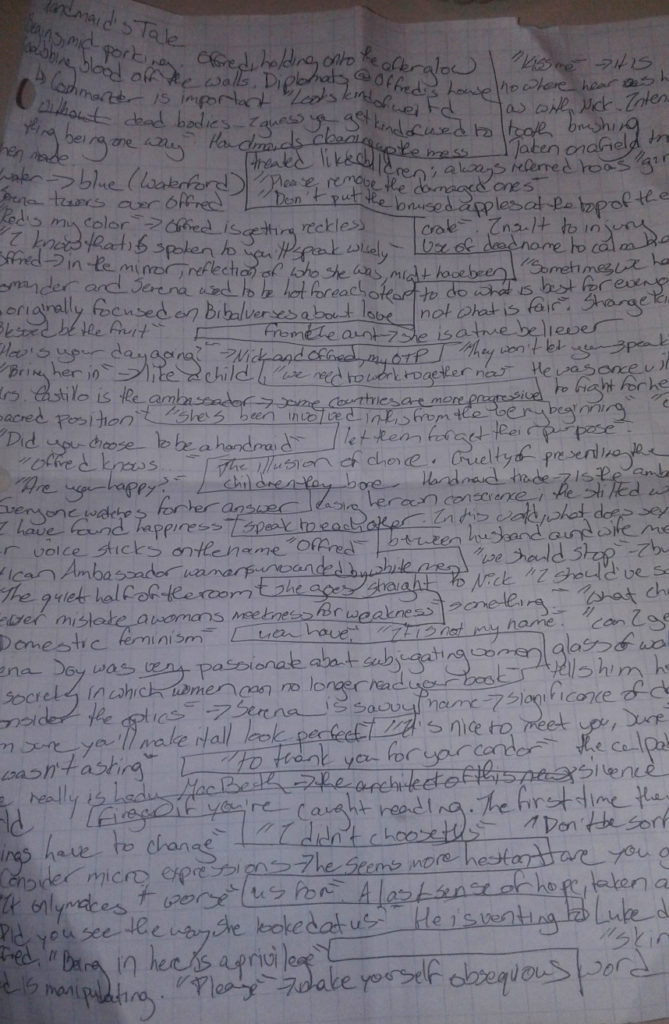 And as always, don’t let the bastards grind you down.