Subscribe
You are at:Home»Television»Horror»Blood Drive Starts Its Blood-Fueled Engine with Episode 101: “The F*cking Cop”

When we last left our fledgling program, there was a reserved hope for what Blood Drive would deliver as a grindhouse-acknowledging television series. The preview promised three things: blood, carnage, and that dirty, 35mm reel feeling that make low-budget horror and exploitation films so alive. Since I hadn’t been given access to episodes before public release, I was left with two questions before even watching one episode, and both have been answered:

1) Is Blood Drive a full-run story, or is it an exploitation TV anthology?

It’s a full ride on one, steady plotline. Where the plot of Blood Drive ends up at the end of the season is debatable. It would probably suit the series to have a new grindhouse storyline each season, like American Horror Story but without the money. I guess we’ll cross that bridge when we come to it.

2) How far will the FCC let Blood Drive go?

Pretty damn far. You’ll be hard-pressed to find a solid minute in Blood Drive that doesn’t have blood, profanity, sexual suggestion, or any combination of those TV-MA labels, but Blood Drive goes further than expected with gratuitous use of censor bars to imply even more graphic scenes. Censor bars are funny, especially in the context of a show like this.

So with our series questions answered, let’s get to the breakdown. 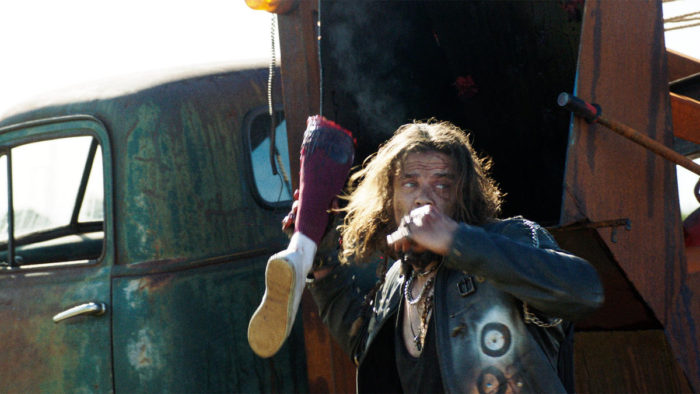 For those of you not yet introduced, Blood Drive is a television series that follows a “blood-and-guts” version of Cannonball Run. The reason for the violence is that their cars run on human blood because, apparently, gas is so expensive that a 3 minute drive on a deserted highway in a Mitsubishi Lancer can cost you $500, money normally reserved for leisurely drives in a Hummer. Oh, and the winner gets $10 million, while the big loser gets his, her, or their head blown up. The racers themselves are just as insane as the race. We have Elvis impersonator (or maybe it’s him?) Fat Elvis ; biker dude Rib Bone ; ICP dropout Clown Dick; suburban couple Domi and Cliff ; rich guy and his mechanic, The Gentleman and The Scholar; and our heroes, Arthur and Grace. And our MC of the event, Julian Slink, who seems to be an artificial creation of Heart Enterprises like the as of now unnamed but incredibly beautiful and foreboding Aki, who seems to be about to put Arthur’s partner, Officer Carson, through some bad science. 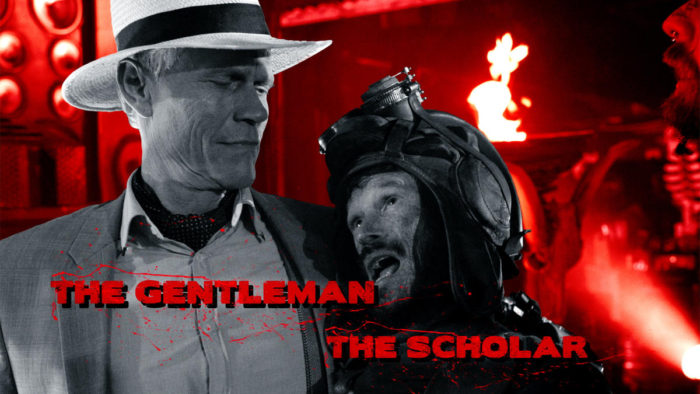 Are we going to get backstories on these characters? I sure as hell hope so considering most of them got flashy, freeze-framed naming shots, but Blood Drive thankfully doesn’t try to cram in a ton of explanation in episode 1. The show lets the action and characters happen. If there’s entertainment to be had in sub-plots, backstories, or origins, I’m sure we’ll get them sporadically.

Besides the aforementioned violence and sexual suggestion, one thing that Blood Drive seems to be doing great just one episode in is giving what normal exploitation films lack: character building. The films are usually 1-1/2 hours a pop, so character development gets pushed aside for action, but Blood Drive episodes are around 45 minutes each. Episode one gives us the vibe of the show as well as a jump-off point for an active plot. Spread across 13 episodes, there’s plenty of time to evolve the plot and the characters while still staying true to the insanity of exploitation cinema. Of course, with a generic dystopian plot centered around the honest cop trying to do the right thing while also staying alive and the girl next door fighting to save her sister, with an evil corporation that controls everything everywhere from the police to beer as the overshadowing villain, Blood Drive is probably not going to be without some corny melodrama. But what sort of B-movie homage would it be without it? 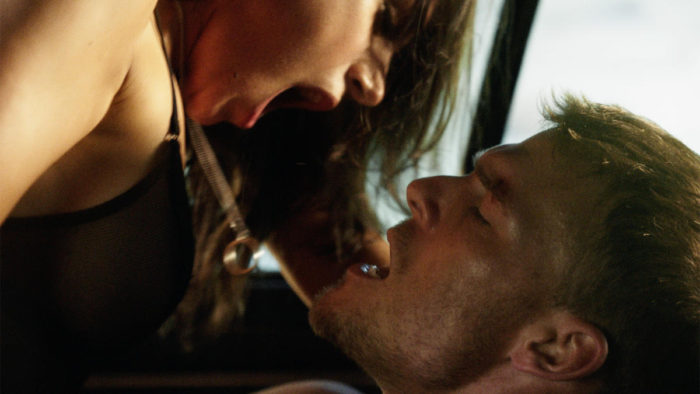 with last place and head explosions almost assured, Grace tells Arthur to “Do me or die,” and they get to it with the car jerry-rigged on cruise control, crossing the finish line in last place with their heads intact.