I take no pleasure in hating things.  I want to establish this swiftly and firmly, and hell all if that opening statement is a bit of a spoiler regarding the raging I am about to do; better the devil you know, after all.  I take no pleasure in it; ironic detachment and snide dismissals are counter-productive to any sort of appreciation of art.  So before I start yelling about this week’s episode of The Mist, I want to take a moment to shout out the boom mic operator.  Buddy, you did your job.  I could hear everyone, and I never saw a hot mic, not once.  And without knowing anything about your life, your love, your skill set, I can still comfortably say that you are far too good for this hot mess of a show.  Full disclosure: I may indulge in some pointed language in this review, because I am seething with rage.  Just putting it out there.

Alright, let’s book through the alleged plot with the same care and attention the show’s writers are providing it:  Kevin and Adrian decide they’re going to leave the church and set out for the mall to find Alex and Eve. Kevin seems to feel like he needs Bryan and Mia with him. Why?  This is not clear.  In fact, one would assume that the fewer people you have when trying to move swiftly through murderous mist would be better. But hold your questions, because this is the least insensible bit of nonsense in the show. Kevin and Adrian ask Scruff McGruff, the cop-bro, if he can take them.  An argument escalates and, for some reason, to punish Kevin, Sheriff Dick moves Bryan and Mia, who were just minding their own, into the basement.  Natalie decides to go outside so that the mist can eat her and she can be with her husband, and a dude I’m pretty sure we haven’t seen named before goes out to bring her back in.  Some sort of bug goes into his ear and his (very clearly cribbed from Silence of the Lambs) death’s head moth tattoo sprouts wings while he spews moths and dies.  Kevin gets thrown in the cellar with Bryan and Mia, and Adrian either has or fakes an existential crisis to steal the keys from the priest, to let them all out. 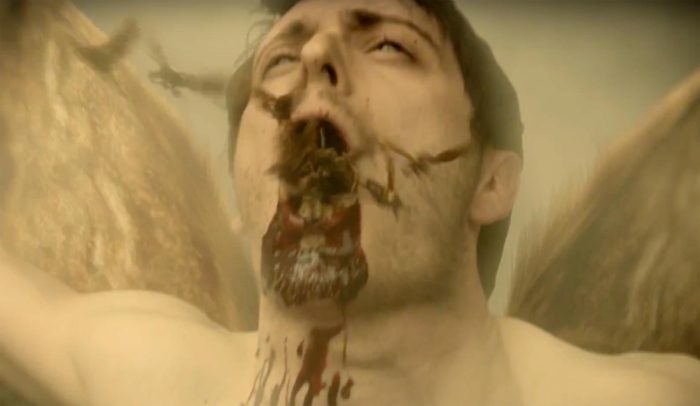 Meanwhile, back at the mall… Eve continues to just be a massive asshole.  Am I supposed to like her?  Because every action she commits is incomprehensible and, frankly, makes me want to punch her right in the taint.  Anyway, she decides that she and Alex are going to break off and form their own settlement because she doesn’t want Alex to be around Dreamy McFootball.  This motivation seems reasonable, until… Eve and Alex head out to get supplies in parts of the mall that are desolate.  And split up.  Are you fucking kidding me?  They’re moving so that Alex doesn’t have to even be around Dreamy in a group, but Eve is totally comfortable with sending her daughter off alone to get supplies, knowing that he could very easily confront the girl, and spoiler alert, that’s just what he does.  Sorry, but the “good mom doing anything to protect her daughter” argument goes out the window when she won’t spend an extra 20 minutes of infinite time getting supplies so that they can stick together.  Alright, so Dreamy tells Alex that he didn’t rape her, that he just put her in a bedroom and took off her shoes so she could sleep.  He points out that Adrian didn’t actually see anything.  And in one of the grossest developments of this show, I believe him.  It seems Alex starts to, too, as Dreamy uses the ol’ tried and true “Let me touch you and show you that nothing happens” technique to prove to her that nothing happened that night.  Why don’t MORE guys use that in court?  Anyway.  So back with the group, the mall manager decides they should lay out some ground rules, which Dreamy writes down.  He’s just writing them.  Not creating them.  But Eve, a grown-ass woman, states that she’ll never follow rules that the teenage boy has written down and starts her exodus.  Some people follow, and Dreamy stops Alex, asks her to stay, leading to probably the most cringey line you will hear on television this year.  Gird your damn loins.  Dreamy says, “Stay with us.  It’s a democracy,” and Eve says, “I always was an anarchist.”  Can you just see the bros in the writers’ room high-fiving when they came up with that?  Anyway, Eve pulls a fucking gun on the teenage boy who is talking to her daughter – not touching her, not even yelling at her, just speaking to her, instead of doing something rational like pulling her away, or stepping between them.  Off they go and release helium balloons with, “Help us, we’re at the mall,” notes attached and it’s lauded as a good idea instead of an incredibly stupid one, since helium balloons go up, not forward.  Simultaneous to much of this, some dummies who work at a video game store decide to lure the mist beasties, or whatever they are, by putting the bodies of the folks who hanged themselves at the end of last episode outside.  There is absolutely no explanation for this – for why two nerds would think it was a good idea to lure monsters that would be as likely to kill them as anyone else or why they thought they could chum the waters with those corpses.  It is all phenomenally stupid. 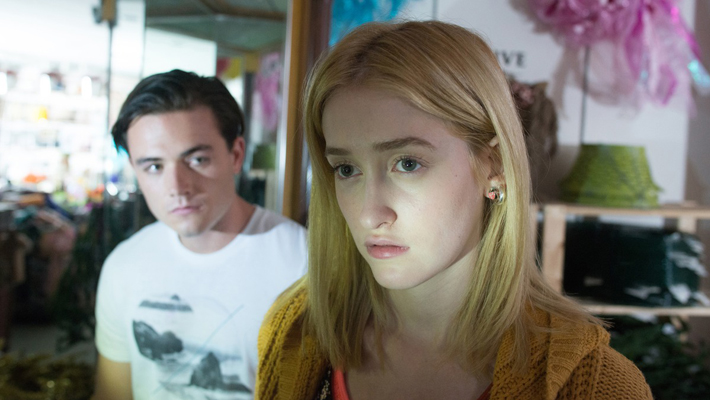 Alright.  So.  We’ve seen how dumb every choice every character makes is. What else doesn’t work?  The characterization is inconsistent.  We’ll come back to the Eve of it all in the next paragraph so sit tight, but aside from her, there’s the Adrian question.  I can show you how completely inconsistent the characterization on this show is by one bit of dialogue performed by Adrian in a conversation with the priest.  He says, “God doesn’t love me because I’m gay,” (he actually calls himself a pejorative I refuse to repeat) and then follows it up with, “being gay’s not a sin.”  The same character says both of these lines, within 30 seconds of each other.  Honestly, The Mist, try harder.  Do better. But also, the show truly needs to pull back on how creepy they’re making Adrian.  He is veering dangerously close to the old cliché of the “gay villain,” without any of the camp that made those extremely problematic caricatures weirdly endearing. And all we are left with is the queasy feeling that this show is actually pushing a very retrogressive agenda.

And then there’s Alex, whose entire plotline should be expunged from history.  Because it is gross.  There is no addressing of her trauma, of how she is recovering.  She is written like any number of pouty, petulant teenagers, not one who has just endured one of the worst trials a person can survive.  To gloss over a rape and treat it simply as Eve’s motivation is reprehensible. Congratulation, The Mist, you fridged Alex. 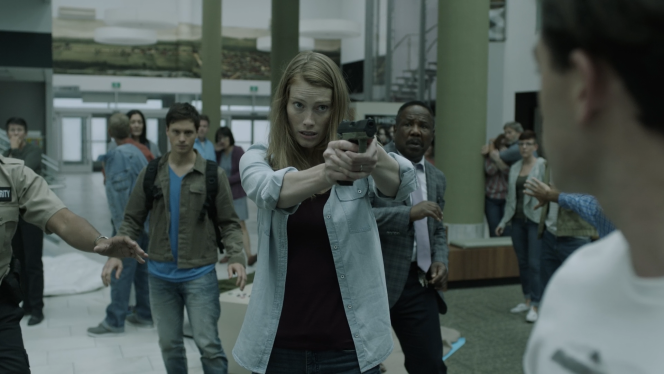 In the name of Eve. Fucking Eve.  Who is the worst.  Who is a poor caricature of a human being.  Who is supposed to be a teacher and an advocate, who’s supposed to have had her own life and reputation damaged by rumors and spurious talk and knows that technically what Adrian saw was a big pile of nothing, who is supposed to be progressive, but pulls a gun on a child.  A child.  Because in this world, Dreamy is still, technically, a child.  There is a nuanced conversation to be had about what society owes a rape victim and the accused, but this is not that conversation.  I would call it ham-fisted, but I respect salted meats too greatly.  Alex’s passivity, Eve’s violence, all of this turns Dreamy into a victim, and both female characters into something akin to actual villains.

Bryan remains too pure for this stupid world.  The actor playing him is consistently great (worth nothing, the actress who plays Eve is good enough, it’s the character who’s ass) and deserves much better material.  Give. Him. A. Plot.

I have about a million more things to say; pages dedicated to what absolute hot garbage this show is.  But at what point am I just a lunatic, railing at the moon and demanding coherence from a swirling morass of vaguely Lovecraftian allusions and nonsensical caricatures that feel straight out of some MRA’s goodtime handbook?  I don’t know, but good news, I’ll be back next week for even more.