Subscribe
You are at:Home»Television»Horror»Netflix’s The Haunting of Hill House Shows that Home is Where the Black Heart Lives 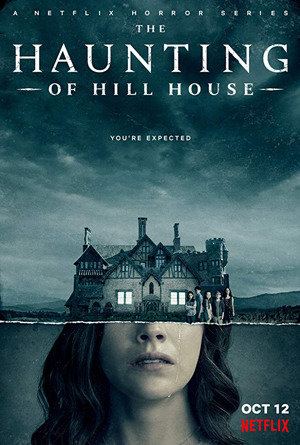 I passed a very nearly heroic portion of this weekend drinking red wine from a box and watching The Haunting of Hill House – 90 percent for pleasure and 10 percent for the benefit of writing this review that, god willing and that creek don’t rise, you are reading right now.  Because Netflix releases its episodes en masse (the better to be binge them with, my dear…) I am, for better and worse, writing about this show as a somewhat amorphous whole, instead of tackling it episodically. Let’s get the ugly out of the way first; as such, I will not be as detailed about plot or even character as I normally would.  But here’s the silver lining; in the case of a show like this, it benefits greatly from a certain vagueness.  If you have not watched it yet, the experience will be enhanced by going in as near to green as you can manage.  I am usually a ravenous spoilers monster, searching every obscure corner of the internet for whatever scraps I can find, but in the case of “Hill House”, I went in blind.  And the impact was absolutely worth the twitches and shakes it took to keep me from the siren call of Google.

Let us first, and primarily, dispel of one important facet of The Haunting of Hill House:  it, for certain, shares some thematic DNA and a number of character names with the Shirly Jackson novel, but it is far from a straight adaptation.  Those already exist; if you want a faithful look at the source material, you have options, and by all means, avail yourself.  This ain’t it.  It is of the same sturdy, familial stock, in atmosphere and certain motifs, but in most relevant ways, it is its own entity, entirely.  I’ve spent a great deal of time describing it as the unholy love child of House of Leaves and Hereditary, and I stand by the assessment, 2000 utterances later.  I went in anticipating the family drama, trauma, and other things that don’t actually rhyme.  The basic premise of the show, the elevator pitch, is that the five Crain siblings spent a short, but devastating portion of their young lives living in Hill House with their parents.  The ramifications of that time follow each Crain throughout their childhood and into adulthood, impacting their careers and their relationships, with lovers, friends, their father, and each other.  The eldest, Steven, writes a book about their time in Hill House, which oldest sister, Shirley, resents, feeling that it is a public airing of private issues.  Middle child, Theo, is both promiscuous and aloof, a child psychologist who lives in Shirley’s guest house.  Luke, tied for baby with his twin Nell, has a long history of drug abuse and lives in a shelter.  And then there’s Nell.  Sweet, damaged, unstable Nell, who to say too much about would qualify as spoiling great chunks of the show.  Put simply, and unrevealingly, the show’s approach to Nell is a sort of fun subversion of the Shirley Jackson novel, where Nell is the main character and omnipresent.  Show Nell’s absence has a far greater impact than her actual presence. 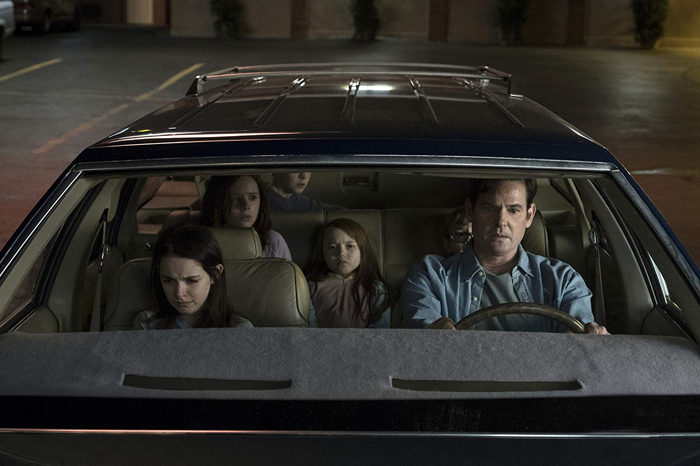 The show is structured to allow each character – Steven, Shirley, Theo, Luke, Nell, as well as parents Hugh and Olivia – their own spotlight episode.  Though within the confines of these episodes, the other characters move freely and are developed and advanced, there is a pivot for each episode, one sibling or parent whose particular trauma with Hill House is examined, and their tortured adulthood is visited more deeply.  For some, it is very obvious – Steven writes a book about it, so that’s pretty damn on the nose – for others, the influence is a bit more diagonal.  Shirley is a mortician, running her own funeral home.  After her mother’s suicide in Hill House, she has learned to process her grief and her fear by facing – and as much as possible,controlling – life after death.  All of the living characters are moving listlessly, joylessly, through their separate lives, until something catastrophic happens to draw them all together again, first under Shirley’s roof and eventually in Hill House, left abandoned after the Crains fled so many years prior.

It would have been easy – and frankly, entirely not fun at all – to have simply painted the youthful memories of ghosts and strange goings on in Hill House as a way for young minds to process mental illness and the pain that would come from witnessing a parent gradually fade away from themselves and develop into something unrecognizable and frightening.  And for certain, there are components of the horror the house visits upon its residence being reflections of their psyches and fears.  But cleverly, the show inverts the expected narrative of “children frightened and confused by their warping mother” when it slips the perspective in the back half of the show, and we see that Olivia’s changes are not so drastic as they initially seem – they are in fact, quite organic with how the House would manipulate what we already know to be pivotal characteristics of her personality. Trust that this vagueness sticks in my knuckles like some truly rancid chewing gum, but when you see the show, it will make sense.  I swear.  Which is an apt enough parallel for the series itself.  So much of what you see in individual episodes is recast in truly brilliant ways when you experience the series as a whole, and see what it’s been working towards the entire time. It manipulates us, the same way the House manipulates the Crains – so rewind with me for just a second, to where I said, “Blah blah blah, psychological trauma is all very well and good, but…”, because what makes the show so satisfying is that while it is, yes, clever in regards to its approach to family trauma and diseased bloodlines (see: the Hereditary portion of the previously alluded to unholy union, hail Paemon) it is ALSO clever in its approach to supernatural horror – which it has and never denies.  The House is a malevolent force.  It was before the Crains, it will be after the Crains.  It exists entirely independently of them, and is, by all possible metrics, a diseased and vicious host.

I have read comparisons to “American Horror Story: Murder House”, and I am ill-equipped to speak to that as I only watched one episode because it was bad, it was a bad show and it should have felt bad about itself, but it may very well have similar motives (The Haunting of Hill House is a better show.  I know it seems like nonsense to say that when I’ve only seen one episode of American Horror Story, but it was bad enough that I could only watch one episode.  I devoured The Haunting of Hill House as if I had been on a 7 day horror cleanse and was getting my first taste of mayhem, reunited and it felt so damn good).  That said, for me, the purest correlation is the House on Ash Tree Lane.  In both cases, the Houses are elemental.  They are not fueled by their hosts, though both deeply scar those living within their walls.  Both inspire a late night flight from the families inside.  Both have an elastic measure of space and time.  The House in “House of Leaves” and Hill House would have a hell of a night drinking some whiskey together and sharing anecdotes about scaring the ever loving shit out of people.

And while I sing the infinite praises of this show – I could barely have loved it more – I am aware that this will decidedly not be everyone’s cup of strychnine tea.  It is a slow burn to a steady boil, that eventually goes pretty damn bonkers.  It is a technical marvel – one episode opens with a 23 minute uncut scene, and it is glorious – it is also ponderous and often deeply, bone chillingly sad.  If that’s your jam, you could hardly do better than to spend ten hours with the Crains and Hill House.  If it’s not… if you find you prefer your horror with more jump scares or greater quantities of gore, that’s cool too.  But The Haunting of Hill House probably isn’t for you.