Subscribe
You are at:Home»Film»The Puppet Monster Massacre: Not Your Normal Puppet Movie 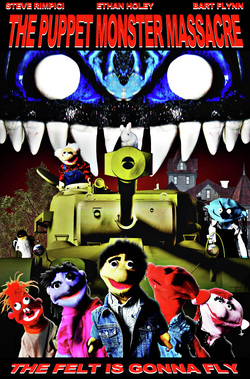 For the better part of 12 years, Peter Jackson’s Meet the Feebles was the answer when asked what film incorporated all of these elements in a way that toed the line between respectable and ridiculous, and worked to entertain an audience.

While Jackson did not continue with the awkward puppet film genre, he did pave the way for puppets to be more than just innocent entertainment for children. He inspired some filmmakers to continue this underground legacy of puppet sex and violence. One of those filmmakers was Dustin Mills, with his feature film The Puppet Monster Massacre.

Dr. Wolfgang Wagner runs the local mad scientist lab in this all-too generic town. To feed his monstrous creation, Dr. Wagner invites a group of teenagers to survive the night in his creepy mansion in order to win $1 million(Yes, very House on Haunted Hill, as one of the characters mentions in the film).

There’s Iggy, the token Englishman; Mona, the nude puppet-girl Iggy is “copulating” with when he receives his letter; Raimi, horror movie fan-boy with moveable zits; Gwen, the girl next door; and Charlie, the oblivious wimp that has the most back-story and therefore will probably save the day. 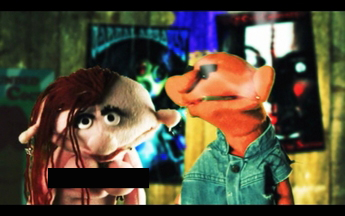 One by one they are picked off in Dr. Wagner’s mansion until Charlie’s war-vet grandfather, Gramps, who punched Adolf Hitler in his ding-ding, comes to save the day.

The plot of the movie is very straightforward. From the beginning, you know Dr. Wagner has bad intentions as he sicks his killer penguin on unsuspecting forest-dwellers. Even the grand revelation at the end is not a twist so much as a plot device to see more animated carnage, as puppets go back in time to become construction paper cut-outs. Probably the biggest twists are that Mona doesn’t sleep with Raimi, and the secret of Iggy the Englishman. 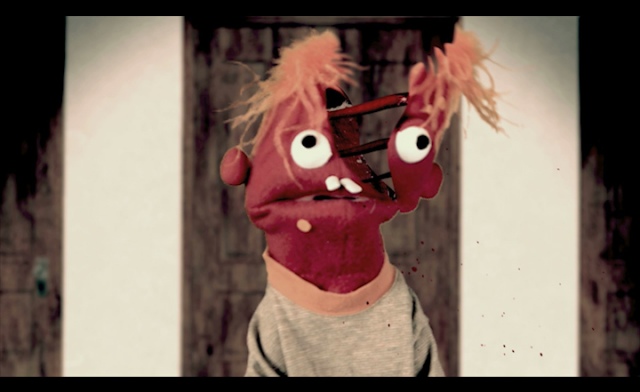 This lack of plot twists works for this film because, let’s face it, we are not watching debased puppets cursing, grinding, and dying for some grand plot. This movie was made for a particular audience, and to complicate a plot too much would take away from the puppet visuals we are all enthralled by. The voice acting, storyline, frame sequences are all fine for what this movie’s feature is; a horror movie with puppets.

The one disappointing thing about the movie was the use of animated backdrops. While The Muppets and The Feebles both used live-action film sites, this movie was almost, if not all, green screen. This was most likely a budgeting issue so it is unfair to judge too harshly on how the backgrounds were set up, but there was a loss of that satirical spirit that Meet The Feebles invoked. At the same time, the CGI blood and gore worked surprisingly well in this movie, so you take the good with the bad.

All the same, Puppet Monster Massacre was an entertaining, must-see movie that toed the line between respectable and ridiculous for the entertainment of all.