Kids just aren’t as scared of summer camp as they used to be. Maybe it’s because they aren’t even going away to summer camp unless forced to by the state.

Still, the nostalgia of summer camp is enough to help us begin our Summer Camp Slasher Series, a tribute to horror movies featuring campers, camp counselors, and the maniacs who murder them. 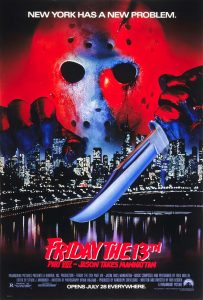 Plot: A poorly-dropped anchor ends up severing electrical wiring at the bottom of Crystal Lake zaps the inert corpse of Jason Voorhees. Jason then goes on a cruise to New York City to take in the sights, and the body count. Hey, he’s been stuck in the woods for over 30 years. It’s about time he took a vacation.

Killer: Jason Voorhees, as well as the willful ignorance of New Yorkers.

Critique: The only thing that saves Friday the 13th Part 8: Jason Takes Manhattan from being left out of franchise boxed sets and never being watched again is the “in your face” ridiculousness of the whole movie. There is absolutely nothing that can possibly be taken seriously. At least Part 7 had that stereotypical feel-good moment of forgiveness at the end, even if it came as a dead father bursting out of a lake as if he just fell in 10 seconds ago and not like a rotting, water-logged corpse. Part 8 doesn’t even come close to that, and it doesn’t even want to.

One thing that helps put Part 8 into the “enjoy with tongue firmly glued in cheek” pile and not the garbage pile is how even the title makes sure the film isn’t taken seriously: Jason Takes Manhattan. Replacing an unstoppable murder machine with those likeable Muppets in a title is an automatic win in my book. Not only does the title spoof a beloved children’s film, but it helps jump-start the race between horror franchises to find the most ridiculous settings for their horror icons. Freddy goes to the beach in The Dream Master, so Jason goes to New York City. The leprechaun goes into the hood, and then space. Jason follows into the science fiction crossover. Even Pinhead takes in the sights of the galaxy. A killer snowman goes to Hawaii in Jack Frost 2. It’s the odd settings for horror movie that make them more funny than scary, but still enjoyable.

Unfortunately, it takes Jason 3/4 of the movie to actually get to Manhattan.

Scene of Awesomeness: Julius boxes with Jason on a rooftop. A valiant effort, but ends with Jason punching Julius’ head off. Literally.

Scene of Ridiculousness: Miss Van Deusen leaves a group of kids in the restaurant of a cruise ship as it’s taking on water. As the main group prepares to get off the ship, Van Deusen states she has to go get them. Sean says, “There is no restaurant!” The kids apparently are promptly left to die.

1 unloaded speargun to the stomach

1 speargun bolt thrust into the chest by hand

1 axe to the face. The guitar kind of axe

1 sauna rock to the stomach

1 harpoon to the back

1 shotgun blast to the chest

1 hypodermic needle through the back

1 head smashed through a cast-iron pipe

1 pipe wrench to the head

Actors/Actresses of Note: Scott Reeves, who plays Sean the protesting son of the boat captain, used his role in Friday the 13th Part 8 to springboard into daytime soap operas like The Young and the Restless and General Hospital. And Kelly Hu, who plays they nerdy science student, ends up playing Lady Deathstrike in X-Men 2. So yeah, really no one of note this time around.

Patrick began collecting a library of VHS tapes, DVDs, and CDs when he was young, and continues to build a library that could easily double as a video store and/or a revitalized Tower Records. View more posts